This page for my newest AI only-KILIE 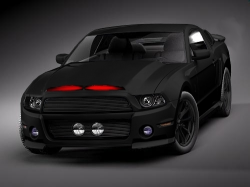 KILIE is KARIE's fraternal twin cousin bodywise, and her name's acronym stands for Knight Industries Living Intelligent Entity. KILIE is KITT (KI2T's) Daughter programming wise, and in looks as well, as she has an 2010 Mustang Body as well, but one that is of an black 2010 GT500E (Eleanor) body with an normal stock OEM GT Rear Spoiler that mirrors her father's original spoiler in terms of looks. 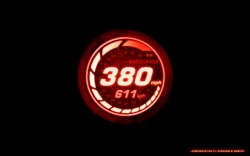 Even though her spedometer looks identical to KI2T's, it isn't. It's actually an upgraded model of the holographic one that KI2T uses.