This is the mode KARR is normally in. In this mode, KARR is a mustang, but his hood is a venom ram air hood that has  as an v shaped scanner at the front of the hood. Interiorwise, he looks like his old self as well, but done with black and tan mustang interior. Also, at the rear of KARR's new body, is an  similar spoiler to what he had on  his old trans-am body.

As on his his old body, KARR also has a new Super Pursuit Mode built into his new body as well. In his new Super Pursuit Mode, emergency air brakes are deployed by sliding out from his new side skirts when he needs to stop suddenly. This mode is only used when extra speed is needed. Also, two wide black spacers extend across each headlight, thereby decreasing the intensity of the bright lights at night, or while in Super Pursuit Mode.

karr also has two other bodies, that of an 2008 shelby cobra gt500kr, and one that is an 2010 shelby cobra gt500 modified with an 2010 Venom ram air hood that was normally made for the 2010 mustangs, yet the hood was modified to fit the new cobra's body. 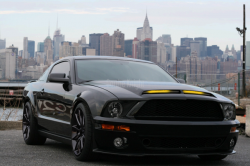 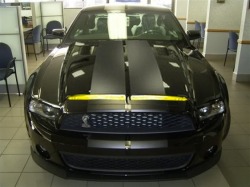